'Fear and Loathing in Palin times 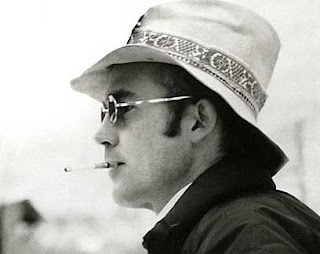 We were somewhere around Barstow on the edge of the desert when the drugs began to take hold. I remember saying something like 'I feel a bit lightheaded; maybe you should drive...'; And suddenly there was a terrible roar all around us and the sky was full of what looked like huge bats, all swooping and screeching and diving around the car, which was going about a hundred miles an hour with the top down to Las Vegas. And a voice was screaming: 'Holy Jesus! What are these goddamn animals?'

The genetically vicious nature of presidential campaigns in America is too obvious to argue with, but some people call it fun, and I am one of them. Election day - especially when it's a presidential election - is always a wild and terrifying time for politics junkies, and I am one of those, too. We look forward to major election days like sex addicts look forward to orgies. We are slaves to them.
Which is not a bad thing, all in all, for the winners. They are not the ones who bitch and whine about slavery when the votes are finally counted and the losers are forced to get down on their knees. No. The slaves who emerge victorious from these drastic public decisions go crazy with joy and plunge each other into deep tubs of chilled Cristal champagne with naked strangers who want to be close to a winner.
That is how it works in the victory business. You see it every time. The weak suck up to the strong, for fear of losing their jobs and money and all the fickle power they wielded only 24 hours ago. It is like suddenly losing your wife and your home in a vagrant poker game, then having to go on the road with whoremongers and beg for your dinner in public. Nobody wants to hire a loser. Right? They stink of doom and defeat.
[---]
Back in 1948, during his first race for the US Senate, Lyndon Johnson was running about 10 points behind, with only nine days to go. He was desperate. And it was just before noon on a Monday, they say, when he called his equally depressed campaign manager and told him to call a press conference for just before lunch on a slow news day and accuse his high-riding opponent, a pig farmer, of having routine carnal knowledge of his sows, despite the pleas of his wife and children.
His campaign manager was shocked. "We can't say that, Lyndon," he supposedly said. "You know that it isn't true."
"Of course it's not!" Johnson barked. "But let's make the bastard deny it!"
[---]
I look at elections with the cool and dispassionate gaze of a professional gambler, especially when I'm betting real money on the outcome. Contrary to most conventional wisdom, I see Kerry with five points as a recommended risk. Kerry will win this election, if it happens, by a bigger margin than Bush finally gouged out of Florida in 2000. That was about 46 per cent, plus five points for owning the US Supreme Court - which seemed to equal 51 per cent. Nobody really believed that, but George W Bush moved into the White House anyway.
It was the most brutal seizure of power since Hitler burned the Reichstag in 1933 and declared himself the new boss of Germany. Karl Rove is no stranger to Nazi strategy, if only because it worked for a while, and it was sure fun for Hitler. But not for long. He ran out of oil, the whole world hated him, and he liked to gobble pure crystal biphetamine and stay awake for eight days in a row with his maps and bombers and his dope-addled general staff.
They all loved the whiff. It is the perfect drug for war, as long as you are winning, and Hitler thought he was king of the hill forever. He had created a new master race, and every one of them worshipped him. They were fanatics. That was 66 years ago, and things are not much different today. We still love war.
George Bush certainly does. In four short years he has turned our country from a prosperous nation at peace into a desperately indebted nation at war.
Αναρτήθηκε από Alexis Stamatis στις 5:15 AM